You are here: Home / Forex trading / Bitgreen sweeps Polkadot’s 29th parachain auction ahead of a 14% tumble in DOT price

Polkadot price’s time in the murky waters of a bear market run seems far from over. If a falling triangle pattern matures, the parachain token risks plunging 14% from the breakout point. For now, support at $6.15 is moderating the building selling pressure. However, most technical indicators hint at a continuing downtrend.

Bitgreen was announced the winner of the highly contested 29th Polkadot parachain auction. Parachains are used to connect to Polkadot blockchain by leasing a slot on its Relay Chain. Crypto projects that clinch the spot get up to 96 weeks of support, with an option to renew the lease.

Action winners are required to lock up a bond in DOT for the duration of the lease. The DOT tokens locked on the Polkadot blockchain are leased at the end of the lease – as it is viewed as the opportunity cost to use the assets for other engagements.

Bitgreen is an upcoming crypto project building a permissionless blockchain. The idea is to bring DeFi (decentralized finance) and Web3 under one roof while focusing “on green projects, renewable energy tech, microfinance & impact investing.”

DOT price is preparing for another selloff

Polkadot price is testing the strength of the buyer congestion zone at $6.15 after failing to crack the falling triangle’s hypotenuse resistance. The 50-day SMA (Simple Moving Average), red, was in line to provide support at $6.40, but it did little to prevent DOT price from revisiting the x-axis support.

A falling triangle is a highly bearish technical pattern often prolongs an asset’s preceding trend. In other words, Polkadot price will tumble 14% from the breakout point (a-axis). Traders must wait for the price to confirm movement below the support (a-axis) before activating their short orders. The breakout target is equal to the distance between the highest and lowest points of the falling triangle. 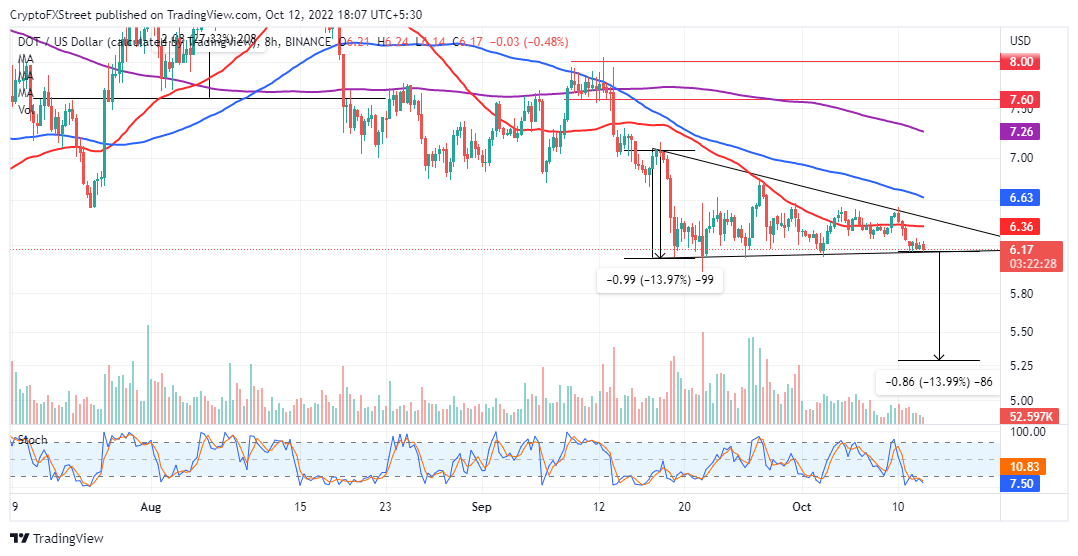 An immediate rebound from the axis support at $6.15 cannot be ruled out, especially with Polkadot price wallowing in oversold conditions. Insight from the Stochastic oscillator cements the bears’ influence on DOT. However, the index is expected to regain ground, which might call on buyers to join the market and take advantage of a potential swing to $7.10 or even to $8.00, respectively.