The selling bias in the single currency grabbed extra impulse and forced EUR/USD to break below the key parity level on Thursday.

EUR/USD shifts the focus to Lagarde

EUR/USD remains offered after the ECB walked the talk and hiked rates by 75 bps at its event on Thursday.

The ECB reiterated that it intends to keep raising rates to endure inflation returns to the bank’s 2% target. In addition, the ECB said that it will reinvest principal payments from maturing securities at least until the end of 2024. 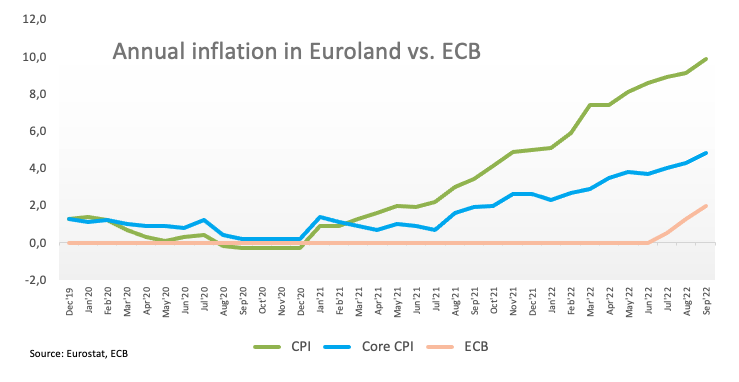 What to look for around EUR

EUR/USD’s upside momentum meets an initial hurdle around 1.0100 and managed to bounce off the sub-parity area soon after the ECB interest rate decision.

In the meantime, price action around the European currency is expected to closely follow dollar dynamics, geopolitical concerns and the Fed-ECB divergence. The resurgence of speculation around a potential Fed’s pivot seems to have removed some strength from the latter, however.

Furthermore, the increasing speculation of a potential recession in the region – which looks propped up by dwindling sentiment gauges as well as an incipient slowdown in some fundamentals – adds to the fragile sentiment around the euro in the longer run.

Eminent issues on the back boiler: Continuation of the ECB hiking cycle vs. increasing recession risks. Impact of the war in Ukraine and the persistent energy crunch on the region’s growth prospects and inflation outlook.