You are here: Home / Forex trading / EUR/USD fluctuates around 1.0620s on softer US PMIs, and risk aversion

The EUR/USD remains subdued during the North American session, following monetary policy meetings by the Federal Reserve (Fed) and the European Central Bank (ECB), with both entities raising rates amidst a period of high and stickier inflation. However, a surprisingly hawkish tone employed by the ECB President Christine Lagarde capped the fall of the Euro (EUR) vs. the US Dollar (USD) amid a wide interest rate differential. Therefore, the EUR/USD is trading at 1.0620s, fluctuating.

Investors’ sentiment remains sour after worldwide central banks continue to tighten monetary conditions. A light US economic docket featured the release of the S&P Global PMI for December missed the estimates, reigniting recessionary fears in the United States (US) economy. Manufacturing PMI dived to 46.2 vs. 47.8 expected, while the Services Index slid to 44.4 from 46.5 foreseen. Consequently, the S&P Global Composite Index dropped to 44.6 against the estimated 46.9.

Chris Williamson, Chief Business Economist at S&P Global Market Intelligence, said, “Business conditions are worsening as 2022 draws to a close, with a steep fall in the PMI indicative of GDP contracting in the fourth quarter at an annualized rate of around 1.5%.” Williamson added that hiring has slowed in the manufacturing and services segment. The survey suggests that Fed rate hikes, although taming inflation, recession risks tilted to the upside.

Of late, the New York Fed President John Williams commented that the labor market remains tight, and that would warrant further action by the Federal Reserve, said in a Bloomberg interview. Williams expects inflation to get towards 3 to 3.5% in 2023, though he added “that the real issue is how do we get it all the way” to the Fes’s 2% target.

Meanwhile, the calendar was busy in the European session, with S&P Global PMIs released for the Euro area, France and Germany, with most of the figures being better than expected. Regarding the Harmonized Index for Consumer Prices (HICP), inflationary data for the Eurozone was 10.1% YoY, below the 10.6% of the previous month, though higher than the estimate of 10% reading. The core reading was unchanged at 5%.

Additionally, some ECB policymakers expressed that inflation poses a challenge, and most members expect further rate hikes at the following meetings.

From a daily chart perspective, the EUR/USD is still upward biased, though it should be said that a close below 1.0592 could pave the way for further downside. After the EUR/USD rallied to multi-month highs around 1.0736, since then, it has been a one-way drive south, though the Euro is set to finish the week positive. Oscillators with the Relative Strength Index (RSI) and the Rate of Change (RoC), suggest that a correction might be underway. Though the fall’s scope is unknown, it will face its first support at around 1.0500, closely followed by the 20-day Exponential Moving Average (EMA) dynamic support at 1.0479. 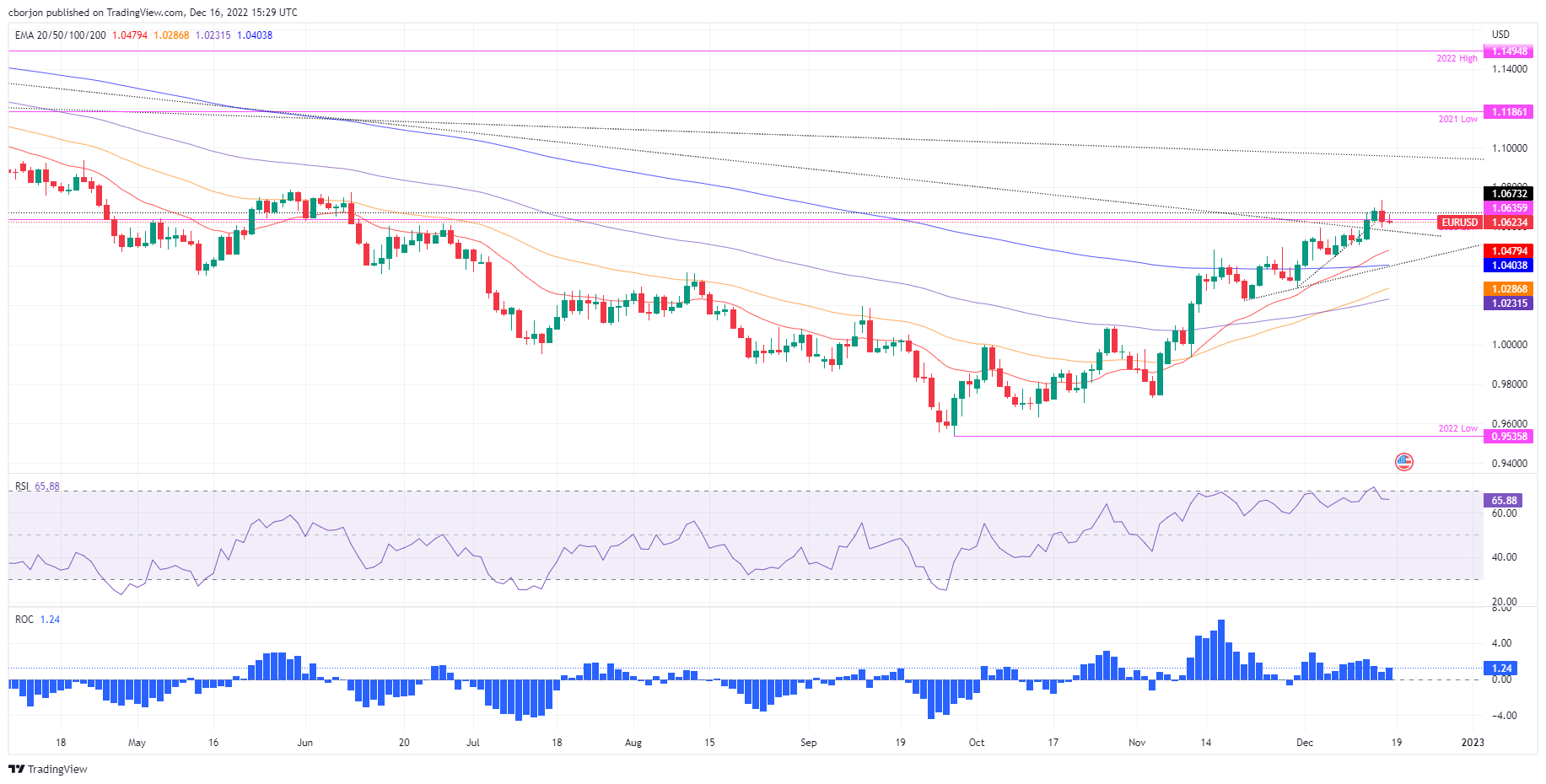