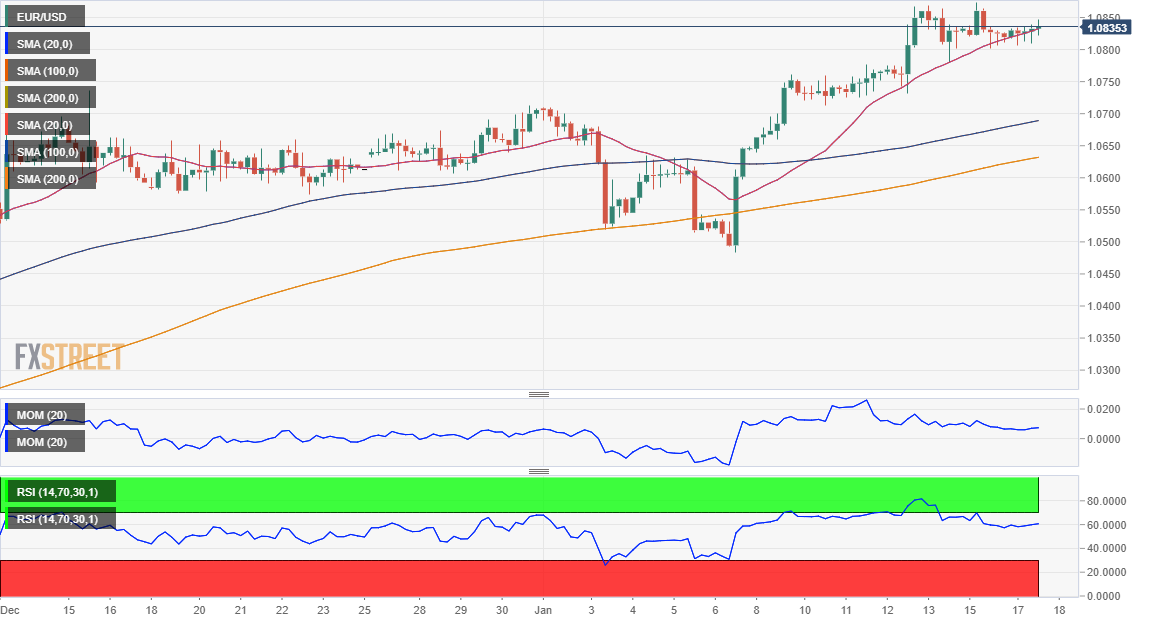 The EUR/USD pair is confined to a tight range ever since Tuesday started, now trading in the 1.0830 price zone. The US Dollar is generally weak, despite the market mood being sour, reflected by the poor performance of European Indexes.

Partially explaining the limited demand for the Euro were comments from European Central Bank (ECB) chief economist Philip Lane, who said that to get interest rates back to their target levels and bring inflation back to the desired level, the central bank tightening will need to halt. However, he clarified that the central bank needs rates to reach restrictive levels, noting that they “need to raise rates more,” before changing course.

Market players did not react to mixed German data. The country confirmed the December Harmonized Index of Consumer Prices (HICP)  at 8.6% YoY. Also, Germany published the January ZEW Survey, which showed that Economic Sentiment improved to 16.9 in the country and to 16.7 in the Euro Zone, much better than anticipated. However, the Current Situation index plunged to -58.6. The United States will publish the NY Empire State Manufacturing Index for January, previously at -4.5%.

The EUR/USD pair maintains its bullish bias, according to readings in the daily chart. Technical indicators are picking up modestly after consolidating well above their midlines. At the same time, the pair remains well above a critical Fibonacci support level, the 61.8% retracement of its 2022 decline at 1.0745. Finally, the 20 Simple Moving Average (SMA) heads firmly north below the aforementioned Fibonacci support while standing far above the longer ones.

The 4-hour chart suggests that near-term buying is picking pace, although the momentum is still limited. Technical indicators rotated higher at around their midlines, while the pair seesaws around a bullish 20 SMA, unable to confirm a bullish breakout at the time being.

View Live Chart for the EUR/USD