You are here: Home / Forex trading / EUR/USD tumbles below 1.0500 on risk-off mood, despite upbeat Factory Orders in Germany

The Euro (EUR) is extending some of its Monday losses against the US Dollar (USD), stuck below the 1.0500 figure amidst a risk-off impulse, as data released in the United States (US) did not bolster the USD. Factory Orders in Germany surprisingly exceeded estimates, underpinning the Euro. Therefore, the EUR/USD is trading at 1.0487 after hitting a daily low of 1.0475.

US Trade Balance deficit widened and could weigh on Q4 GDP

Wall Street is set to open lower, portraying a dismal mood. The Department of Commerce (DoC) in the United States revealed the October Trade Balance, which showed the deficit widening for two-consecutive months, as figures came at $-78.2B exceeding estimates of $-80B, though trailed by September’s $-74.1B. Delving into the data, the Exports rose by $256.6B below September’s data, while Imports jumped $334.8B above the previous month’s $332.6B.

In the Euro area, Germany revealed its October Factory Orders, which rose above estimates of 0.1% and smashed September’s figures. Worth noting that orders grew for the first time since July. Compared to October 2021, orders fell at an adjusted 3.2%. The report added that companies still have difficulties fulfilling their orders as supply chains are interrupted, blamed on the war in Ukraine and distortions spurred by the Covid-19 crisis.

Elsewhere, the EUR/USD has not been able to rally back toward multi-month highs at 1.0594 due to last week’s solid US Nonfarm Payrolls (NFP) data for November, with companies hiring more than 263K jobs, exceeding 200K estimates. Also, Average Hourly Earnings jumped to 5.1% YoY, and Monday’s release of an upbeat US Institute for Supply Management (ISM) Non-Manufacturing PMI at 56.5 vs. 53.3 estimated will keep the US Dollar bid.

Meetings of the Federal Reserve and the European Central Bank loom

Given the backdrop, investors are assessing that the US Federal Reserve (Fed) would keep tightening monetary conditions. Money market futures odds for a 50 bps increase in the Federal Funds rate (FFR) at the December meeting are at 79.4%, while odds for a 75 bps are at 20.6%. Regarding the European Central Bank (ECB), some policymakers like Villeroy, Makhlouf, and Herodotou, expressed their support for a 50 bps rate hike, contrary to Knots and Holtzman, which backed an aggressive 75 bps.

The EUR/USD daily chart suggests the pair remains upward biased but losing some momentum, as Monday’s candlestick printed an inverted hammer, which usually appears at the end of an uptrend/downtrend. Since Monday, the Relative Strength Index (RSI) has been aiming downward, while the Rate of Change (RoC) proves sellers are losing momentum. Therefore, the EUR/USD might pull back before resuming its uptrend. 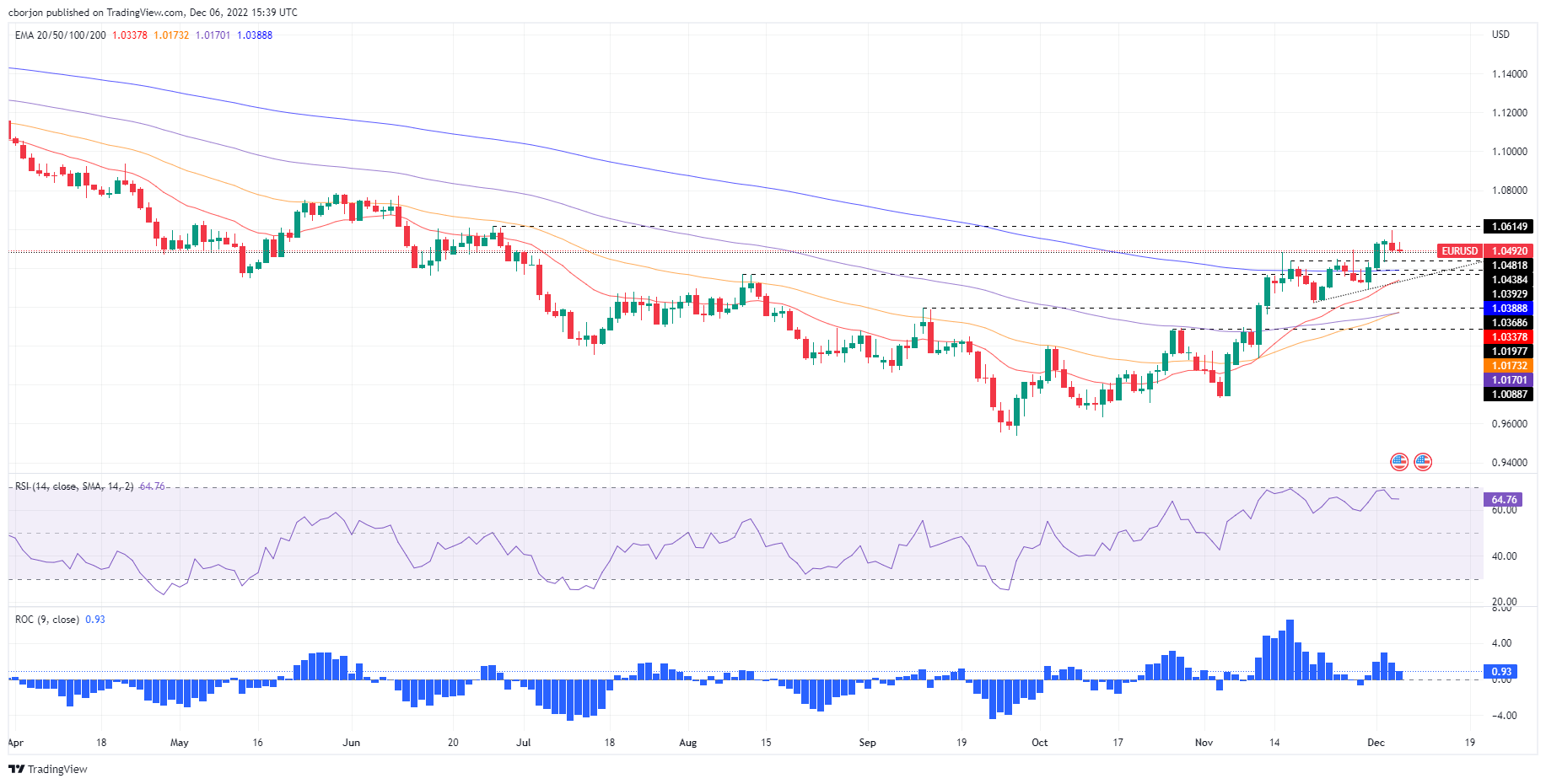