Tron price is trying to find its footing after retracing from resistance encountered at $0.0650. The DAO (decentralized autonomous organization) token had on October 24 rebounded from support established between $0.0602 and $0.0610, in tandem with last week’s crypto market relief rally.

Other key developments include the listing on the Binance-CoinMarketCap cryptocurrency’s top ten Equal-Weighted Index and the launch of TRX staking on Binance US. The Tron network achieved a lot in October, which could boost TRX price in November. All eyes are fixated on the token’s ability to defend the support at $0.0620 ahead of the expected bullish breakout.

Tron price is about to flip bullish

Tron price appears to be at the tail end of its retracement from $0.0650. Looking at the eight-hour chart, a falling wedge could confirm a 3.01% move to the upside. This pattern forms when the price consolidates between two downward-sloping, tapering resistance and support lines. The pattern points to a possible trend reversal (in case of a length downtrend) or trend continuation (in case of an uptrend).

A significant bullish move is expected after Tron price breaks above the upper trend line. The falling wedge has a precise profit target (3.01%) equal to the distance between its widest points and extrapolated above the Tron price breakout point. 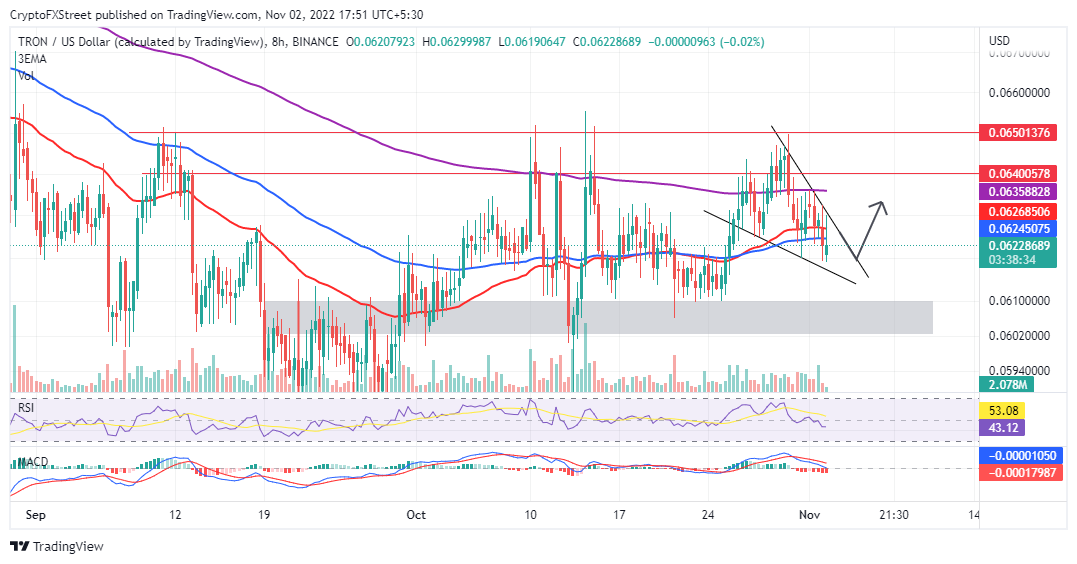 Traders must tread carefully, keeping in mind that the MACD (Moving Average Convergence Divergence) dons a sell signal. As analyzed above, failure to break above the wedge pattern could put pressure on support at $0.0620, paving a southbound move to $0.0610 and $0.0620 – if push comes to shove.