You are here: Home / Forex trading / Will XRP price rally as Coinbase throws weight behind Ripple in battle against SEC?

The SEC v. Ripple legal battle got more intense as crypto exchange Coinbase requested permission from judge Analisa Torres to file an amicus curiae brief. The exchange has joined a trade group and other groups in arguing that the Securities & Exchange Commission (SEC)’s case threatens the broader industry.

Coinbase vouches for Ripple in legal battle against the US SEC

Coinbase, one of the largest cryptocurrency exchanges by trade volume, has joined groups arguing that the US SEC’s case against Ripple threatens the crypto industry.

The exchange platform has joined the long list of Ripple’s allies and filed a plea with Judge Analisa Torres asking to file an amicus curiae brief. The leading platform plans to support Ripple’s case against the SEC’s allegations that the payment giant made an unregistered sale of XRP tokens.

The SEC argues that Ripple violated securities laws and considers XRP a security. However, this is a matter of intense debate as more blockchain groups and crypto organizations come out in favor of the payment giant. Experts believe that the SEC v. Ripple battle could end as early as the first half of 2023.

Paul Grewal, Coinbase’s chief legal officer, said in a series of tweets on October 31 that the exchange had asked the presiding judge for permission to file an amicus brief. Grewal argued that the case is a “textbook” definition of “just how critical fair notice is.” 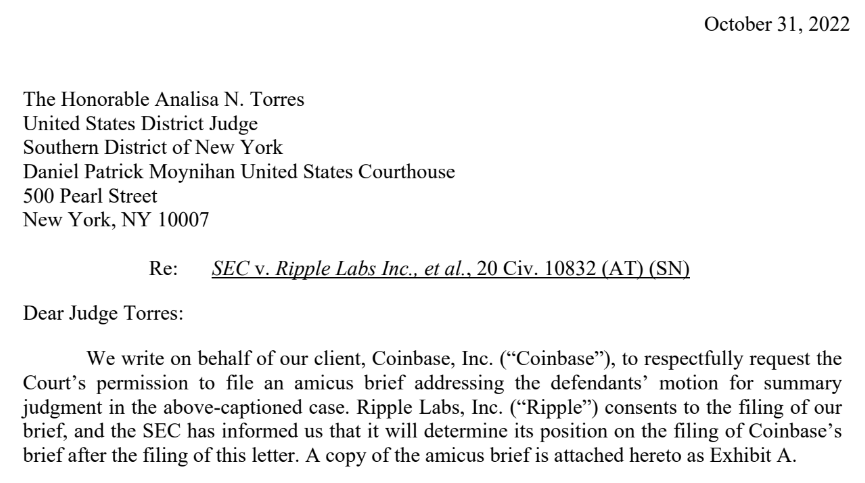 Given the absence of SEC rulemaking for the cryptocurrency industry, the question of whether the SEC has given fair notice before bringing an enforcement action against sales of one of the thousands of unique digital assets will often be highly fact-intensive, which makes it particularly ill-suited for adjudication on summary judgment.

The exchange acknowledges that Ripple and others who have been subjected to extensive regulation by enforcement are alone in the fight. Despite intense scrutiny of Ripple, identical products or services in the industry have been subject to no such thing. This highlights the damage caused by legal action to the crypto industry overall.

Once or if Judge Torres approves Coinbase’s request, the exchange will join crypto application SpendTheBits and non-profit organization Investor Choice Advocates Network in filing an amicus curiae brief. These platforms have received approval for filing similar briefs and stand with Ripple in the last leg of its defense against the SEC’s allegations.

Several analysts have evaluated the XRP/USD price trend and noted that the altcoin’s price has remained largely unchanged over the past month. Gains made by XRP holders were wiped out with the recent decline in the altcoin’s price.

Azeez Mustapha, a leading crypto analyst, argues that bulls are attempting a takeover of XRP price. After crossing key resistance at $0.45, XRP price is likely to march toward the next target of $0.47 and $0.50.

However, if sellers dominate, bearish pressure may result in the breakdown of support at $0.43. XRP price could nosedive to the $0.39 and $0.36 support levels if the decline persists.