XRP, the sixth largest cryptocurrency by market capitalization and the native token of the Ripple ecosystem is on track for a bullish breakout. The altcoin is targeting the $0.3566 level after breaking out of the symmetrical triangle formation. The SEC v. Ripple case is fast approaching its final verdict and both parties are preparing to file their motions.

Also read: Ripple partners drive adoption to the South Asia and MENA, here’s what to expect from XRP price

XRP bulls target the $0.35 level as the altcoin prepares for a bullish breakout

XRP bulls believe a breakout from the $0.3423 level is likely as the altcoin trades close to the upper trendline forming the symmetrical triangle. As XRP price moves between two converging lines, experts await a bullish breakout in the altcoin.

With a market capitalization of $17.3 billion, XRP bulls are on track to drive the altcoin higher. Large wallet investors on the Ripple network started accumulating the altcoin through the recent dip in its price. After scooping up XRP tokens, whales are likely to increase their activity and engage in profit-taking once the remittance coin hits a local high. 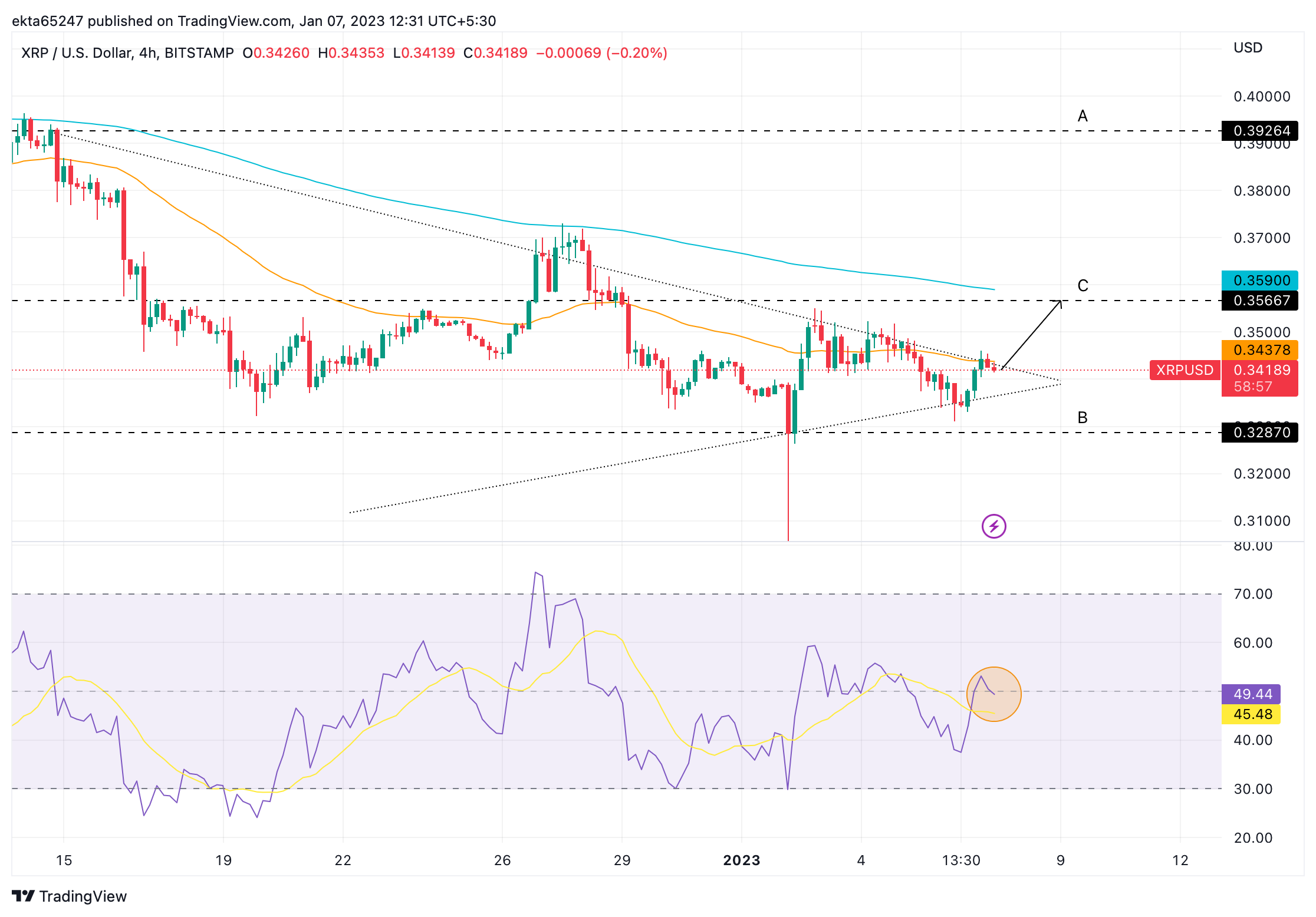 As seen in the chart above, XRP price is moving between two converging lines and is in a symmetrical triangle formation. A and B are two key levels in the chart, at $0.3926 and $0.3287. The altcoin’s next bullish target is $0.3566.

The Relative Strength Index (RSI) is a momentum indicator and it currently reads 49.44. XRP is close to the neutral level, there is no bullish or bearish divergence in the RSI. The 50-day Exponential Moving Average (EMA) is currently acting as resistance for the altcoin and the 200-day EMA is the next resistance at $0.3590.

SEC v. Ripple lawsuit updates, and what to expect

The US financial regulator, the Securities and Exchange Commission engaged in a legal battle with the cross-border remittance protocol in December 2020. The prolonged legal tussle between the regulator and the payment giant continues and Judge Analisa Torres is close to sharing her final verdict on the matter. The two parties recently filed their motions by January 4.

Brad Garlinghouse, the CEO of Ripple hopes that the year 2023 will witness a breakthrough in regulatory clarity for the crypto industry in the US. Garlinghouse shared his thoughts on the onset of the 118th Congress and said he’s cautiously optimistic as support for regulation is “bipartisan and bicameral.”